Many of us do not know about almonds, but we eat them and only add a distinctive taste to food, but in fact it is of greater importance than that. 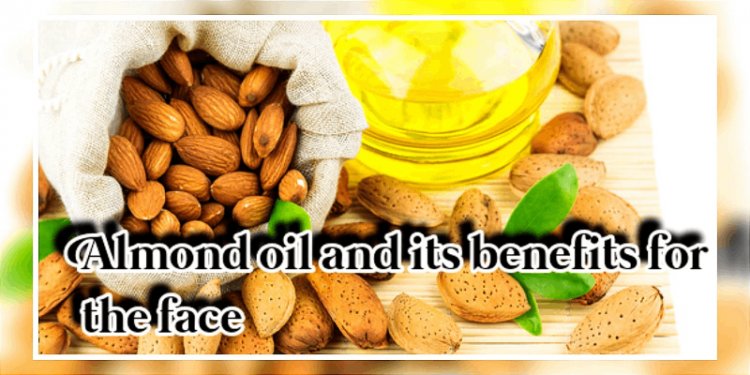 Many of us do not know about almonds except that we eat them and only add a distinctive taste to food, but in fact it is of greater importance than that, and it is based on the benefit of the few after methods and methods. In this article, we will learn about the benefits of bitter almond oil for the face.
The ancient Chinese used almond oil to soften and calm the skin and treat light wounds, but now almond oil has become well-known and familiar that people use for the skin.

Almond oil is known to be antibacterial and antibacterial, but there are also many benefits of bitter almond oil for the skin, the most important of which are:

Where almond oil was used in ancient times to treat dry skin and some skin diseases such as: eczema and psoriasis.

Where almond oil helps to soften the skin, because it contains vitamins, the most important of which is vitamin E, which is based on softening and moisturizing the skin

In 2016, there was a study saying that almond oil may be an effective treatment because it prevents and reduces the appearance of stretch marks on the skin.

Bitter almond oil contains a group of fatty acids that dissolve and remove excess oil on the skin. It also contains retinoids, which reduce the appearance of acne and improve the complexion.

The bitter almond oil reduces the damage that may affect the skin due to exposure to sunlight because it contains vitamins, the most important of which is vitamin E, which works to protect against ultraviolet rays.

Almond oil is spread in makeup removal ingredients
Where to use almond oil to remove makeup, we put a small amount of it in the hand and use the tips of the fingers to put the oil on the areas we want to remove makeup from, then follow that by washing the face with the preferred lotion

It can be used as a moisturizer for the skin

and to use you
As a moisturizer for the skin, we wash and dry the skin as usual, then put a small amount of bitter almond oil on the face and leave it on the skin until the skin absorbs it

Bitter almond oil can be used by mixing it with sugar to make a face scrub, and we can also mix it with salt
It even works as an exfoliator and you can rub chapped lips using bitter almond oil to help exfoliate and moisturize them.

Bitter almond oil is generally considered safe for use on the skin, but in spite of this, you must be careful and precaution and take into account the following points:

You should avoid using bitter almond oil on your skin if you are allergic to nuts
Test the oil on a small spot on your hands before applying it to your skin and face, especially if it is the first time use.
Bitter almond oil contains a substance called cyanide, which is a toxic substance, so you should be careful and careful, because it can lead to very dangerous side effects.