Hey, how is the Earth shaped In principle, the Earth is spherical, but at the same time, how do we see that it is flat This is what we will know now 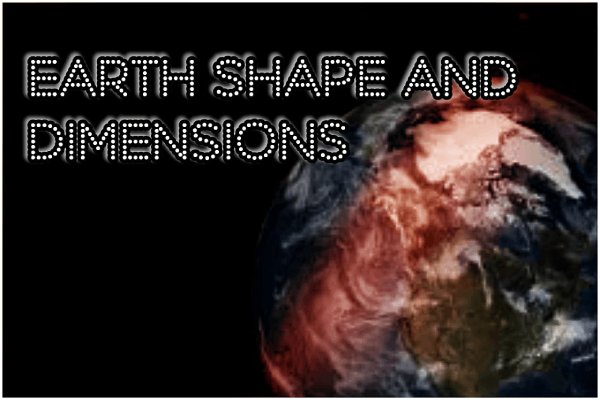 Hey, how is the Earth shaped?
In principle, the Earth is spherical, but at the same time, how do we see that it is flat? This is what we will know now:

This is other than that there remains a difference in the angle of the sun’s rays and it has resulted in the sun not descending at one angle and resulting in a difference in temperatures, climate, living organisms, natural resources and the environment.
Someone else can come and say I am not convinced that the earth is spherical and cannot be flat
Well, let's imagine it flat. At that time, the sun's rays will all descend at the same time. This means that it will be daytime all over the world.

This is other than that the sun's rays will descend at a fixed angle, which means that there will be no difference in temperatures, environments, natural plants, or living organisms, but is this what exists?! Certainly not, because we have diversity in every need, and this proves that the earth is spherical and not flat
* Dimensions of the Earth
I am sorry to tell you that the earth is not spherical, or, in a more correct sense, it is not completely round, meaning it is not in the shape of a very spherical means, because the equatorial diameter is longer than the polar diameter and results from it that the earth has become incompletely rotated, and that the earth is dented at the equator and flattened at the poles

What would happen if the equatorial plane was the same length as the polar diameter?!
Of course, at that time, it would have been fully turned, but of course it was not fully turned
We know the latitude and longitude
In principle, the lines of longitude and latitude, we say to them the grid of coordinates, what do we do with it, or what does it help us?! It makes it easier for us to study the Earth's surface
As for longitude: it is an imaginary half-circle that reaches from the North Pole to the South Pole
It is 360 longitude lines divided by the main longitude line Greenwich, which is zero degrees
Why did we call it Greenwich?! Attributing it to the conference that is working in south London in Greenwich, they decided that they called it Greenwich
So what are the benefits of meridians?
It tells us the locations east and west of the Greenwich line, but it works to know the time difference between countries
For example, if we have Cairo and Khartoum on the same longitude, this means that they have the same time. For example, if Cairo has an hour in it, it is followed by afternoon, meaning that Khartoum is also followed by afternoon.

The time in Tunisia is now four and four minutes
And the further east we go, the more time advances by four minutes
Ok, why when we produce it in the east, time advances?!
Because the Earth rotates around itself every 24 hours, so the sun's rays fall on the eastern part, east of the Greenwich line, before the western part.
Latitude: They are imaginary, parallel, unequal circles that revolve around the Earth
It is made up of 90 latitude circles divided by the equator and its degree will be zero in the north. We will find the schools of Cancer corresponding to the Tropic of Capricorn in the south, and the Arctic Circle corresponding to the Antarctic circle and the two degrees of 66.5 and the North Pole corresponding to the South Pole and the two degrees of 90

Its benefit:
The Earth is divided into thermal regions in which wind, rain and temperature are determined, and we know the location in the north and south

As for the common benefit between longitude and latitude, which is that the two determine the locations of cities and countries on the map.