The Hyksos, the rulers of the fifteenth dynasty in Egypt, were of non-Egyptian origin. There are many theories about their ethnic nationality. Most archaeologists consider them to be a Semitic people coming from Asia, where the names of their rulers, such as Khayan and Sakir Hot, are considered Semitic. 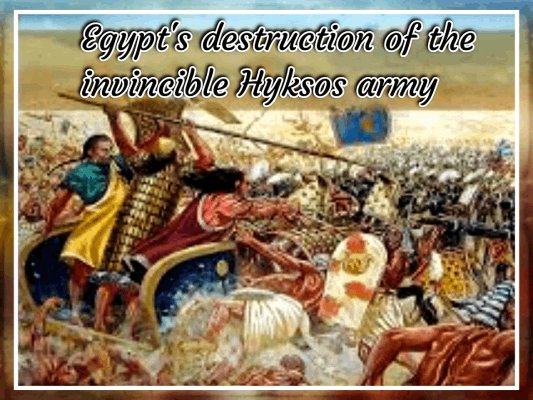 We often hear about a name that we hear frequently, or at least once in our lives, we hear this name, and they are the Hyksos

The Hyksos, the rulers of the fifteenth dynasty in Egypt, were of non-Egyptian origin.
There are many theories about their ethnic nationality. Most archaeologists consider them to be a Semitic people coming from Asia, where the names of their rulers, such as Khayan and Sakir Hot, are considered Semitic.
The Kingdom of the Hyksos was concentrated in the eastern Nile Delta and Middle Egypt, and was limited in area, as it never extended to include Upper Egypt, which was ruled by Egyptian rulers from Thebes. It seems that the relationship of the Hyksos with the south was of a commercial nature, yet it appears that the good princes recognized the Hyksos rulers, and may have had to pay tribute for a period of time. The rulers of the fifteenth dynasty of the Hyksos established their capital and the seat of their government in Memphis and the summer residence in Zwan. The Hyksos occupation of Egypt lasted for about a hundred years, and their residence in it was not calm; Rather, it was met with many revolutions and resistance from the Egyptian people.

There are many interpretations about the meaning of the name Hyksos, and Manetho said its meaning
Shepherd kings The word heck means king and sus means shepherd
The historian Yusuf bin Matta said, “The shepherds captives.”
Sir Alan Gardner sees me as the president of a foreign, mountainous country

The Egyptians called them the plague and the pestilence, and those names are coming back
For the ball and for the Egyptians to hate them.

The Hyksos occupation period did not add anything to Egyptian history. It was a period of looting, looting and sabotage. But the Hyksos introduced to Egypt some of the military technology used by the Semitic peoples, including horse-drawn chariots, compound bows, piercing axes, and curved swords.

Manetho says that the Hyksos attacked the land of Egypt in huge numbers that the Egyptians were unable to resist at first, and they burned cities, destroyed temples, and captured women and children. After a fierce war with the Egyptians, the Hyksos took their capital in the eastern delta, and they called it "Zwan", which was known as Orais, and the Hyksos kingdom was concentrated mainly in the delta and the middle of Egypt. The Hyksos prevailed gradually, not directly, and Lower Egypt (in the north of Egypt) was under their direct rule, while Upper Egypt (in the south of Egypt) (Thebes) and Nubia were under Egyptian rule.

During the reign of King Seqenen Ra II, around 1580 BC, Thebes had reached a level of political power and stature that made the clash with the Hyksos inevitable. This prompted the Hyksos king "Abubi" to make excuses to start the conflict. Seqenen Ra achieved some success in this conflict, but he fell dead in a battle with the Hyksos, and fatal wounds and injuries were noted in his skull.

He was succeeded in the throne of Thebes by his eldest son, Kamose, the last king of the seventeenth dynasty, and his rule lasted only five years, during which he continued the war that his father had initiated. The ancient texts dating back to his reign speak of his seizure of three hundred cedar wood boats loaded with weapons, gold, silver and supplies, as well as his brutality against the Egyptians who were pacifying the enemy.

Meanwhile, his men arrested a messenger sent by the King of the Hyksos to the Emir of Nubia in Kush Sudan urging him to attack Thebes lands from the south. A rebellion by one of his followers. The texts mention the name of Camus and his brother Ahmose - who came after him - at the second waterfall in Nubia, which suggests that Camus penetrated into Nuba lands up to that site.

After the killing of King Seqenen Ra in his wars against the Hyksos, the Egyptian state of Upper Egypt was besieged by the Hyksos in the north and the Nubian kings in the south, and after the killing of King Kamose, then the rule moved to Ahmose I, who was only 10 years old and established
His mother urged him to train to fight with the ancient warriors, and when he reached the age of 19, some of his men picked up a message sent from the Hyksos king to the Nubian kings urging them to crawl on Thebes, which led to Ahmose attacking the Hyksos and defeating them in several battles, and he launched several external attacks on them In their original lands, Ahmose's war efforts were not limited to fighting the Hyksos. He then turned to southern Egypt and led three successive large campaigns in which he targeted the country of Nubia to discipline its prince, who cooperated with the Hyksos on him. Thus, the ancient Egyptian civilization became under the rule of the good Egyptian kings, and the era of the Middle Kingdom ended, which is The era of economic prosperity to begin a new era, which is the era of the modern state known as the era of military glory.