Everything you do not know about jathom

Many of us are exposed to a strange thing that scares him, and when he searches for it, he discovers that it is the corpse, but there is no need to panic. Today, we will learn about the origin of the corpse and what it is 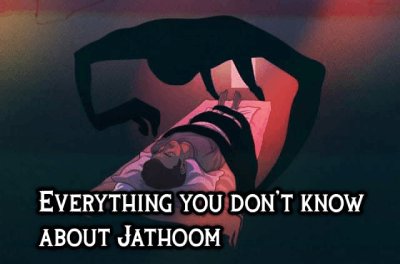 Many of us are exposed to a strange thing that scares him, and when he searches for it, he discovers that it is the corpse, but there is no need to panic. Today, we will learn about the origin of the corpse and what it is.

It is a condition that afflicts individuals and occurs when a person wakes up in the middle of the night and sees and hears everything, but he cannot utter a word or letter even and he does not give any sign or movement, and it is a phenomenon known as sleep paralysis.

Jathoom phenomenon is present when the whole world

Jathom or sleep paralysis transcends cultures and eras. It is found all over the world, in the West as well as in the East.

Since ancient times, this phenomenon has aroused the curiosity of many writers, painters, and artists. They have embodied this phenomenon in many of their artistic and fictional works.

If gathom attacks are repeated, it may lead to compulsive sleep, which is sleeping at unexpected times

It is possible that the corpse symptom occurs when sleeping, or if the person wakes up during a sleep stage, which is a rapid sleep movement, which is the stage in which we dream. During this stage, brain activity is intense, but the connection between the brain and muscles is severed. This interruption occurs for a good reason, which is to prevent the person from responding physically to the course of the dream and thus preventing him from harming himself while seeing the dream.

When a person awakens in the middle of a sleep phase there may be a short period of muscle hypotonia, while the brain is fully awake hence the impression that the person is paralyzed. The viewer's time is short, from a few seconds to a few minutes.

Hypotonia, while the brain is fully awake, is responsible for the sensation of paralysis during a squatting episode

Although the condition of jathoom is disturbing, it is not dangerous. People who suffer from sleep paralysis always end up regaining complete control of their bodies. So do not panic and fear, as it is not a sign of a disease or an underlying problem. But if this phenomenon is repeated, it leads to a disease that is not known much, which is “narcolepsy” or “narcolepsy” or compulsive sleep, which is a chronic neurological disorder that affects the part that regulates sleep in the brain, resulting in chronic sleep disorders, and the patient suffers from drowsiness Excessive and compulsive sleep during the day, and sudden bouts of sleep at inappropriate times, for example while driving a car.

During sleep paralysis, the person feels awake and tries to get up, but to no avail, as if he is daydreaming.
It is impossible for him to move his limbs, even as if he is completely paralyzed. To this feeling of suffocation can be added.

Some testimonies from those who have gone through this experience indicate that they feel threatened by someone or a terrifying fictional figure, on their side. This is because jathom is sometimes accompanied by visual, auditory, sensory and kinesthetic hallucinations.

Psychiatrist and sleep specialist Sylvie Royant-Parola says that during an episode of sleep paralysis, a person breathes normally. He believes that he is fully aware of what is around him, but in reality he is at a stage between a dream and reality, as "his perception of things is unrealistic, and he suffers from deception of the senses." It is normal for a person to feel pain, fear, and even panic during the corpse symptom.

As the psychoanalyst François Bilodeau explains, the feeling of pain may be a result of muscle fatigue while awake. As for hallucinations, under the grip of panic, the brain, which is still in a state of transition from wakefulness to sleep, tries to find an explanation for what it feels. panic.

In fact, paralysis is a normal reaction resulting from the feeling of intense fear, due to threatening stimuli in the environment. At this point, the brain imagines the frightening entity or the presence of strange objects in the sleeper's room.

One of the symptoms of corpses is kinetic hallucinations, which is the feeling that you are like a bird, or the feeling of falling and floating

One of the causes of jathom or sleep paralysis is anxiety, fatigue and exhaustion

Doctors and specialists believe that individuals who suffer from anxiety or tension and who lack healthy sleep are more likely to suffer one or more episodes of gautism or sleep paralysis.

Other causes of jathom, according to them, are fatigue, exhaustion, sudden change in daily habits (such as moving or commuting, changing jobs and bereavement), and bad sleep habits (irregular sleep schedules). And the way to sleep as well, sleeping on the back is a catalyst for the occurrence of corpses.

Sleep paralysis often occurs in individuals who suffer from narcolepsy, narcolepsy, or narcolepsy. However, a very large number of people with jathom do not necessarily suffer from this problem.

To relieve a bout of jathom, do not sleep by lying on your back

There is still no cure for gathom or sleep paralysis, although the Swiss scientist Antoine Adamantidis was able to discover the part of the brain responsible for light sleep known as "non-rapid eye movement sleep." This exciting discovery may lead to the discovery of new techniques that help recover from the state of unconsciousness, and help patients who suffer from sleep disorders or at least they can learn what prevents them from getting a good sleep.

Until then, doctors give some advice and instructions, either for prevention or to mitigate the severity of the symptom and cope with it. It is the result of a mentally and physically tiring behavior and lifestyle.

What do we do to prevent this phenomenon from happening?!

1. Get enough sleep on a regular basis.

3. Sleep in the usual place in a comfortable way.

4. Not sleeping by lying on the back.

5. Stay away from the causes of psychological and nervous stress.

6. Not taking sedatives and hypnotic drugs as much as possible.

7. Treat depression, if any.

9. Try to think in a positive way and stay away from melancholy.

Some of those who are exposed to jathom attacks, or those around them, wonder if there is a relationship between jathom and black magic, or is jathom a jinn?

Psychiatry says that although gathom or sleep paralysis is sad and tiring for the person who suffers from it, it is not dangerous. If suffering from it is frequent, then the person should avoid fueling his panic and panic by searching for answers behind this phenomenon, such as considering that “there is a spirit that wants to communicate with me” or saying “I am possessed”...etc. These thoughts only increase a person's stress at bedtime.

Therefore, these thoughts should not be allowed to dominate thinking, especially before going to sleep. It is also possible to resort to relaxation techniques such as sophrology, or any spiritual or religious method that the person suffering from jathom finds comfortable.

It is possible to reduce the bout of gathering by resorting to relaxation techniques such as Sophrology.

. Appearances are transient. Do not pose a threat to physical or mental integrity. The injured person should remain calm, remember that this symptom is happening to other people, and try to relax and sleep again.

Hallucinations can be overwhelming and terrifying to the point of fear of experiencing another. Above all, Ludo advises the person concerned not to avoid sleep and its associated elements, such as the bedroom and the bed, as this exacerbates tension and further contributes to the emergence of a new episode of corpses. Instead, he should practice relaxation exercises before bed and maintain regular sleep. Hence, consult sleep specialists to maintain sleep habits