Games if you enter and play them, you will not come out of them to live

It is true that now there is no nuclear war between the countries of the world and no invasion, but the framework of invasion and war remains in it, and the intellectual invasion remains, which is the invasion of the ideas of the new generation and the games that lead them to commit suicide without using any kind of weapons 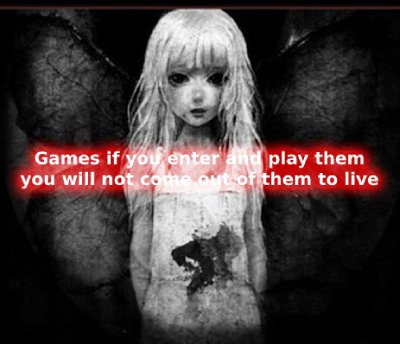 It is true that now there is no nuclear war between the countries of the world and no invasion, but the framework of invasion and war remains in it, and the intellectual invasion remains, which is the invasion of the ideas of the new generation and the games that lead them to commit suicide without using any kind of weapons

Of course, we will start the Blue Whale game, which most of us knew or heard about

This game started in 2013 and I preferred not to spread it until 2016 and after this year the game started to spread and suicide cases started increasing and the issue the heart of all Russia and they accused the owner of the game that it was the cause and the inventor of the game was one named Philip Bodkin and he was 21 years old despite his young age but he was The reason why 16 girls were incited to commit suicide, and he was arrested and imprisoned

Specifically, this game consists of 50 missions

After the person registers in the challenge, the game asks him to draw the blue whale on his hand with any sharp object. And listen to the teachings of the game

And among the victims of this game

As the people of Algeria liked, they lost five children because of it, and only one survived

This game started in Europe and focused on European students, and after that it spread in Egypt

And it was a challenge that two people convince a third person that they jump around him while he is standing between them and they prefer to jump to the end when the role of the player in the text comes to jump, and then he goes to the two of them, as we say, blocking the one in the text, so he jumps behind his head and hits the ground, and of course This had very great damage and very serious cases, because it was very likely that a person would get it, like the name of the game, which is a skull fracture and still lost his life for the price of a game

This game plays on the psychological side of the player, who will definitely stay inside the game at first because he loses his passion and wants to live a new experience. What they call it (the blackout challenge), and of course there are people who preferred to play the game and the challenge muted itself. It is assumed that when a person begins to feel suffocated, he inhales the air at any time, but as you say, he remains in a state of lack of control over himself, as if there is someone who is suffocating him and him Surrendered, of course, which resulted in very many deaths

The name of this game is familiar to most of us

This challenge started in the Gulf countries in 2017.

The game begins as if it is lost from its family and needs help, and the player begins to help her, and of course there will be sound and sound effects in the game, so the player begins to relate to the game and its character and takes it as a friend. This is a weak point and begins to incite them to commit suicide, which many people agree with, but when some players start to feel in danger, they refuse to hear her words, and then she threatens them that if they do not do what she says, his family will be harmed, and this is what pushes him to save his family and infect them.

This game has very many victims, and not only from the category of school students, not from university students

Like the suicide of a student at the Faculty of Law in the village of Kafr Tawila in Dakahlia, the game caused him to commit suicide and hang himself and end his life

Many children, especially the young age, wish that they remain fictional characters, and this game is played by this worker, and the children are deluding them that after midnight, when they go around the room and say the magic words, they will turn into a pound of fire. The same pound of fire

This game was started in 2015 and students who are at the age of each other lie to each other for strange things, so they have a spirit of adventure and challenge, and this game is based on a trick that through it they will be able to summon a legendary character who died years ago, Charlie. And this game caused the death of many children from Libya, Algeria and the Gulf states.

This game appeared in 2016 and caused a lot of disasters in the streets, especially because it depends on the children trying to catch the Pokemon characters and prefer to be concentrated with the mobile on the street, and of course they lose their focus and accidents that lose their lives, and this is through that the player starts spinning on the character of the Pokemon through the maps he walks He sees her and prefers to walk around the pokemon in all places, and he must go quickly to find him before he disappears, and then the accident happens and the player loses his life............

What are the reasons that make a child resort to these games?

The child often remains in a state of depression and emotional thirst, deprived of him in his family. He looks for anyone who hears him to not find him, so he has to occupy his time knowing him, and of course the parents are busy with him, leaving the child most of the time sitting alone, I don't know what he is doing?

You see that as long as they spend on the child and he is in the best schools, this remains the same as the healthy life and the upbringing of the healthy child.

While many mothers stayed on Facebook, busy and busy, and every member of the household

He has his own mobile, and all you see is that the mobile is normal, meaning there is no damage to be done with it, I mean, it is definitely not a weapon that will kill the child, nor is it a gun, nor is it a dangerous god, but they do not know that these games are without a weapon, or a sharp god, or anything that will kill their child and their blessings

This is other than that one of the reasons that makes the child resort to these games is his lack of awareness and that he indulges in the midst of friends of his age without any supervision. Of course, a group of children together will have a spirit of adventure and challenge without avoiding any risks and the family prefers to hide it until it surpasses the suicide of its family

And it is not all the blame on the parents, because it is very likely that it happens with the parents of taking care of their children, but very exceptional cases and at that time the child is attracted to the words of his owner and tries without the knowledge of the parents

What is it that the people are supposed to abandon or do?

She always monitors the behavior of her children without causing him any inconvenience in his life, because no matter what is imposed, he has a part in it that is private, but within limits.

They cuddle their children and try to occupy their time with other useful games, and we go back to the days of the lucky bank that brings the family together or even plays with them. You play with them well and keep them away from these dark games.

It is certain that if the child is busy with the right and useful and feels the care of his family, he will think a million times before he resorts to these games, especially since most games enter through the gaps of the emotional side, which most of them remain deprived of because they do not find anyone who hears them

The last thing is to try to get your son to know the danger of these games by discussion, so that even one day if his friends visit him and encourage him to play these kinds of games, he himself will refuse to join them, on the contrary, he will try to make them aware and understand the danger of dark games.......