I am Khaled, 29 years old, my father is deceased, and I live with my mother and sister, and like any young man who is supposed to take responsibility for the house he lives in after his father’s death. Expenses increased, especially after my mother was tired 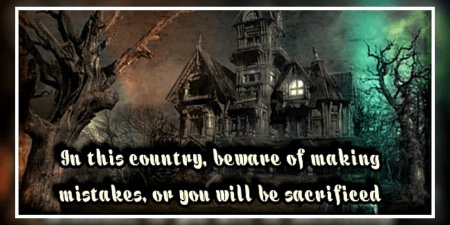 And here was the surprise, and this was what was written in the book about the country
There is a country, and it is the country of Neurosiados, and it is a country that does not have any laws, its people work hard and diligently, where there is no injustice, oppression, theft or any form of corruption, and all of that without any trial and the secret in that
Quite simply, whoever commits any of these mistakes, the return is his life, as with every rotation of the moon, the tribe comes with the most individual who committed crimes and they sacrifice him as a sacrifice to God. The sacrifice that is offered to God is a pig animal instead of a human, but offering a human being as a sacrifice to God is a greater and more important matter than just offering a pig, so they hunt any mistake for any person to sacrifice it and save the people of his village from it

Of course, I stayed in the villages of these words, and I did not believe and did not understand anything, and I say, sure, it will not remain the same country. I started to be afraid and terrified, and I left two days after the full moon. Something I did not deal with anyone, although I am sure that there is no benefit, and that is why they will kill me. Today is perfect for the moon. I actually found all the people doing a big party and sitting at the head of the party, someone who looks aging and looks suspicious, and everyone in the village kneels to him as if he is their god, and I found them coming to me And they pulled me and put me in front of this man. I sat relaxed and told them I did not know, but of course no one understood me, and I found a huge man holding a large cleaver and putting it on my neck. I sat down to vote and said to them, I did not know, I did not know, and here I heard the voice of Adel. Yes. I met him with more workers than me, and he said, “Wake up, uncle.” What did you not know whether you dreamed of what you looked like, or what? nightmare
I completed my journey on the sea and I counted the first day and I was unable to forget the details of the days I lived in the village and I counted today and woke up while I was on the boat and found people voting and saying the boat is sinking I kept working above myself and I say to myself a dream but this time Adel was with me and he assured me that it was not a dream of the boat sinking seriously and I am also drowning I found myself again on the same island that I dreamed of, but this time I was not alone. He was with me, Adel, but this time I knew that I would live in this village, how I would never do anything wrong, but Adel had a different opinion. He wanted to make the same mistake that he made and take Eating for free and living as I wanted, I preferred to guess a lot and swear that all this I saw and lived, I came to Oriel, the book I had, but I didn't find any books, I didn't have books at all.
He said, "Listen, Khaled, we are long here and we don't know where we are, and I won't hear from you the dreams and superstitions that you say, and I don't believe you and preferred in the same style."

It's okay, it's free, unfortunately, it will be a sacrifice to God. As the full moon approaches, I used to hear my words, and I used to believe me. As for me, I live without any sin, and I will work and do exactly like them......