It wasn't just a dress it was a dress of ruin

My name is Samar. I have a 21-year-old diploma in industry, and we are on the same path, but thank God for the generosity and grace of our Lord. One day, I had a job interview in a company that wanted people who were not highly qualified 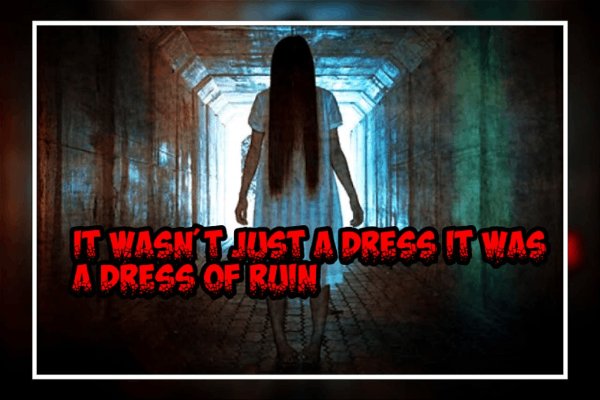 I am still coming out of the street where the shop is in order to go for a ride. I found someone calling me and telling me, Professor, you made it difficult for me. I will tell you where did we bring this dress, but you did not tell the owner of the shop I came to, I told you, these are pieces of livelihood
I promised him that I would definitely not bring his resume, and in fact he told me about the address of a man who goes to homes and buys old clothes from them
I went to the man, and he said, “My daughter, you are my advice. You have good luck, because you will come soon enough. I know if you were a little late, I would have forgotten where this place is and where he described me with the address.”
I got out and it was a very luxurious building and a nice area, and as soon as I entered through the gate the doorman sat praying like this.
I asked him about Mr. Youssef’s apartment, and he sat praying rigidly and no one answered when he got up and knocked on the buttons in the elevator, and it was the last turn, and I took a bite and got out.
The first time I knocked on the door and opened one, and the first time she saw me, she sat screaming and crying and reached a point of horrible agitation.
I found her son outside and her husband and two workers praying and beating her until she passed out and he gave her an injection to give her to someone when she fell asleep and I, from a lot of embarrassment, took a bite and walked so I heard the voice of her husband saying: Who are you, my daughter, and what do you want and what brought you here?
I told him the whole story from the first time I bought the dress until when I came to them
The man had tears in his eyes and sat staring at his son and said, “My daughter, this dress is really sold by us, we are the ones who sold it.”
I used to have a daughter, her name is Suzan, and I have no other choice, she and this son of mine
And on the day of reading her opening, she told her mother to come with her to clean the dress, but she was tired. She couldn't go with her, and Susan had no friends.
And then we were surprised by a call saying that Susan had hit her with an Arab and she died on that hour
She died before she was happy in the dress that she chose herself, and before she was happy about reading her opening, and from her hour and her mother carried her guilt and said that if she had gone with her, it would have been her time, and we would bring her psychiatrists so that they could deliver her the idea that this was her life and destiny, whether she was with her mother or not, and that's how she would have died and died Every time she saw the dress, she meant to sit screaming and crying, so we had to sell it, but we didn't know that this could happen.
I told him that what happened and happened to my sister. He sat crying and said, “Sure, her soul is upset. Her joy has been kidnapped and I am happy with the dress, with your permission, my daughter. I want this dress for any amount, please. I will burn it because my daughter is not comfortable and she sees another wearing her dress that she does not wear.”
Of course, I told him that I would give it to him without money, and we agreed on a second date when I would give him the dress.
And I'm still working, I say you are right, Mom, really, this dress must be burned
When I call Mary, I tell her to bring the dress
I called a lot, the mobile says it's switched off
I went to call a lot, no one answered
Until when I found the number, it answered me
Where is Maryam's voice?!
who is this??!
This is one voice saying: Please, miss, we found this number, the last number ringing on the mobile. Can you come quickly?
Why did you tell them what?!!!
Your friend, regret, your friend, live, you made a traffic accident on the road, stay for God
I went to the hospital
I met her... I found Susan sitting next to her dress, which Mary was wearing, hilarious, and laughing
Why did you, Mary, wear the dress? I hope you don't wear it
I found Susan's father calling me because, of course, he didn't make the appointment
And he said, I waited for you a lot, Your Honor, you didn't give me an appointment, how did you get angry?
I told him, I don't have to come
He said, "We don't agree that we will rest Susan's soul and we will burn the dress."
I told him she was relieved, and she closed the rails
I got dressed and went to Maryam
And I saw her, I saw her in the midst of them, wearing her dress, and laughing and walking calmly among the mourners, and no one felt her presence but me.....