In 1980 I adopted a new house in the city of Karbala in a neighborhood called Al-Abbas neighborhood. This house was its owners living outside the Arab world and they decided that they would rent it, and then he came to one, his wife and his son, and he asked that he rent the house and actually rent the house 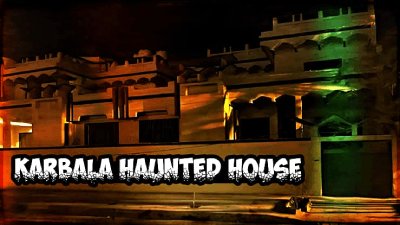 In 1980 I adopted a new house in the city of Karbala in a neighborhood called Al-Abbas neighborhood. This house was its owners living outside the Arab world and they decided that they would rent it, and then he came to one, his wife and his son, and he asked that he rent the house and actually rent the house

Until a day came and they did not hear any pure sound, and after a while, they discovered that the man had killed his wife and son at home, and they knew that they had arrested him, imprisoned him, and died in prison.

After this crime, the house preferred closed, or rather, it was deserted for nine years

In 1989, one of the Baghdad merchants decided that he would rent the house, and he actually paid him, and appointed a guard to the house in order to clear his mind from the house. After a while, they found this guard killed and no one knew if he would kill my nation or how then they went to the house to get the dead body out of it. They heard a voice coming from the inside of the house and says

No one steals at that time, everyone who entered to get the body out came running from it

And everyone said that the house is inhabited by a jinn, and that this jinn kills anyone who enters the house

And one day the merchant came to enter the house and see him, and the first time he opened the door, he was struck by an electric wire. Within minutes, the man died. It might seem normal.

But what is not normal is that when they went to investigate what happened, they discovered that the existing electric wire was not connected to electricity, and at that time one of the residents of the Abbasid neighborhood said that after this incident, the house was kept locked for 22 years and all these years have not transgressed in pure peace

On the contrary, everyone who approached the house and did not pass from his poems would hear the sound of a single drum screaming in the face of the house and saying that the six who were killed and her son preferred their souls inside the house, they refused to leave him and say that they saw the bodies of eggs standing behind the windows and heard their screams

And there is another one of the residents of the area who was telling that he was one day returning with his friends and they were going to their homes, and the way of their houses was close to this haunted house, and at that time, it was two at night, and they decided that they would approach the house and see what was happening and what the sound of the drums was, and they actually approached the house and then they saw A man was sitting on a broken window in the house and shouted at them and told them to run away, his friends. The first time they heard this sound, they ran, but he remained in place for a few seconds, as if he did not know how to walk, and then he ran, but it felt like this person was running after them.

They preferred to run to a mosque when they found a mosque, they entered it and sat in it and preferred to recite the Qur’an until the morning came and they went back to their homes again.

The house remained in this condition until 2012, no one satisfied with it, and then when the owners of the house came back, they decided that they were the ones who restored the house and lived in it, and of course all the neighbors were amazed

But after that, the owners of the house kept telling that they did not sleep and did not know how to sleep and for many hours they heard that there was a small child crying and the voice of people talking to them

And of course the family decided to sell the house and sold it to people who don't know the subject of the house, and they sold the house without telling the new buyer about the one in the house

Take the new buyer home, and as usual, I repeat the same story with them, and they do not know how to sleep because of the many terrifying sounds they hear, as if there is someone sitting with them in the same place, and they say that when they sleep, they feel that they are not alone in the room, and they preferred that until they also left the house and walked

And if you ask any Iraqi, you will find that they know the story, because most of them know the story of this house, but each one tells the details of the house as he sees it.

Like a woman from Baghdad, she says that she knows that one and her son are very poor. They decided that they live in this house without anyone knowing, and that's why the house was empty, but the jinn in the house tortured her until she and her son died at home

After a while the house was visited by a buyer and they spoke to them and called him and asked him: Is the house really haunted, as people say?

Although this house is the whole area, I know it, but if I went and asked one of them, they would not talk about the subject, because we do not want the area in which we live to lose its importance because of the house in which it is located, and at that time no one will approach this area

They went to the house and told them there was nothing, and they sat convincing them that they were supposed to be afraid of the jinn, but then the response came immediately inside the house and they heard the sound of a party running and the drums turned on suddenly

And they say that this house in the time of Saddam Hussein remained one of the security services, but they are robbed

Of course, there is a lot of gossip and no one knows the truth. Where can all this story be a legend in Karbala, and it may be true seriously, but it is certain that it has been said by many and many people are sure that the story is true.............