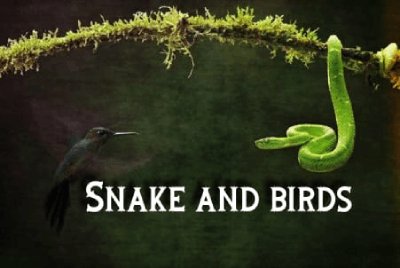 The fisherman says: After a day's tour, she was exhausted, and I sat on a tree trunk to rest.
While I was sitting, the cries of a bird caught my attention
Little girl was fluttering on her nest in very great fear
It was clear that she is facing a difficult situation..!!

I approached the source of the sound and it was at the top of the tree
The neighbor showed me the secret of her annoyance..
There was a big snake crawling up over
The tree with its eyes fixed on the nest where it lies
mother sparrow chicks..

While the mother was screaming out of panic and fear for her young children
I saw the father bird fly away and roam in the air
As if he was searching for something.
Moments later, he came back carrying a branch in his beak
A little boy covered with paper and then approached the nest where
The sparrow was cuddling its young.

So he put the little branch on top of them and covered them with his leaves
The petition then stood on a nearby branch watching the situation
Waiting for the enemy to arrive..!!
I said to myself: How naive is this bird?
The cunning snake will be deceived by this simple trick

Moments of tension passed before the snake reached
Location and turned around a nearby branch..
And when she got close to the nest, she raises her big head
Getting ready to break in..!!

It was clear that everything was completely over, but what
What happened next was very exciting.
The moment the snake is about to break into the nest
It stopped and turned and then suddenly turned and sped up
Far from the nest as if she was hit by a gun
And the snake descended back to where it came, and it seemed
Her disorder is obvious..!!

And I didn't understand what happened but I saw the father bird come back
To the nest so that the happy family's cries rise for joy
To escape from that snake.
He removes the branch from above the chicks and drops it to the ground

So I picked up the branch and kept it until I met someone
Biological experts in the Latin jungle.
He told me that these papers contain a strong substance
The toxicity is lethal to snakes.
Even snakes are afraid of seeing them and terrified of their smell
And avoid touching her..!!

I was amazed at those disciplined laws that govern
Life in its exciting minutes..
It supports the weak, confronts the strong, and gives the bird
The little one has knowledge, wisdom, courage, love and fatherhood
like this..!!

The point..
God has carefully planned all the vocabulary
Life is small and big..
The one who taught the bird that these leaves contain deadly poison
Life fears him, he will not leave you in times of adversity and will inspire you
The right behavior to get out of it healthy and sound..
Do not worry about your life, your children, or your livelihood
Glory be to you, my Lord, how great you are.
Rest assured, your present and future are in the hands of God, the Wise
The Almighty, the Merciful, and everything is in the hands of God. Indeed, he despaired and kept praying and continued in it without tirelessness or boredom until the answer to the prayer comes to you......