I once heard about a city that disappeared with its inhabitants I mean, imagine, for example, that when you wake up in the morning, you meet people, your family, your neighbors, and the area in which you live. 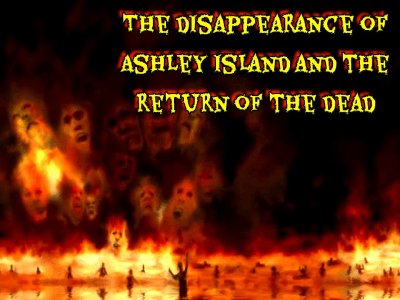 I once heard about a city that disappeared with its inhabitants

I mean, imagine, for example, that when you wake up in the morning, you meet people, your family, your neighbors, and the area in which you live.

It does not exist, and this is exactly what happened to the city of Ashley

The earthquake was about 8

After what, of course, they overcame and stopped the search and considered that the 700 countries all died, exactly a day or two after they stopped the search, a second earthquake occurred, and the surprise was that it was in the same place with the same force.

These reports were going to the Hays State Police Department

Hayes, this was the city next to Ashley

Ashley, of course, did not have a police station because it was a very small city. About 700 people lived in a city that did not have a police station. The first report that happened was surprising that one complained that there was something in the sky that appeared black in color. A few minutes later there was another report on the same subject that there was something in the sky. It increased and grew with time. Exactly minutes later, twenty reports came that there was something in the sky. The issue was very strange and made the police department wonder what was happening in the sky. Of course, to make sure of this matter seriously, they sold one of their people to the policeman they sold, who knew the way well. It was very one road, but there was no right or left. This policeman was going to the city, Ashley, on the road that is known to be the one who wanted Ashley. The surprise was that he called on them after he arrived. He told them that he and he was going to the city of Ashley. He found himself going back to it again and preferred to swear to them that He is not right or left and he sat repeating this topic more than once and found that the road actually leads to her again. I mean, you are exactly in a circle, looking from a place you return to again, although this did not happen.

The police department did not believe that I sold many cars. They found that the issue was really serious, and that the cars were going back to the starting point again, and this is a strange thing. And when the police really made sure that the matter was suspicious, and that there was something wrong, they returned to their place again and informed the residents that no one leaves the house for any reason, and at the time After midnight, 12 came to them, a report came from one of the six that their neighbors were not present, although their neighbors took the car and went to the police.

Where did the neighbors go?? No one knows

On the second day, a report came to them that the weather was very dark, although the report was coming to them early on from 9:00 and 10:00, and the reports said that the sun had not yet set.

A little later, a report came to them from one of the six women that her daughter was talking to her father, but this is not the problem. The problem is that her father died three years ago, and after a while she found her daughter outside, telling her where she was going. She told her I wanted to go to them

Who are they? No one knows

After 20 minutes or half an hour, 321 reports came to them, all from the same people from the city center, and that their families wanted to go out in the dark and wanted to meet them.

At that time, the police warned them and told them that no one goes out of the house for any reason, but of course the children did what was in their minds and went outside, and then the matter was very terrifying.

All of them went out in the dark, and no one found them until another one. The second day, they were surprised that there was an old woman reporting that there was a fire coming out of the hole in the sky above the one they reported that it was getting bigger and then the matter increased very much because there are many people who started complaining that there is fire It really came up from the sky until a little later, they found that there was someone talking to them and telling them that the fire began to descend on the ground, and it remained like a pillar that reached the sky from above and descended to the ground from below. One is six, and exactly on the 15th, which was the day before the city disappeared, then this call came from the other, because the six workers were crying and telling him

“My son is inside me.” The officer asks her, “How is your son inside me?” My son who died a year ago entered me now and he is fond of

The officer, of course, was surprised, and of course she collapsed in the eye. She wanted how many seconds, and then she said they all came back

The officer asked her and said, "Who are these countries who have returned?"

He said to her, “Ok, where are you?” She told him, “I am under the table, hidden as all the people are hidden, and the people for whom I opened the house, the whole house remained fond.”

Then the officer heard the voice of Azaz breaking and talking to her, and he sat calling for her.

The officer heard someone looking at her as a surprise, so she screamed and said to someone inside me

And then the call ended, and that was exactly the last call, and then they went to the crack until it closed.

This is exactly what happened in Ashley in 1952.