There was a time when a poor woodcutter had nothing but his day's food, and he had a beautiful young daughter, who was a sister to four other sons, and with them his old mother, and she was presenting with them in the same house and his wife 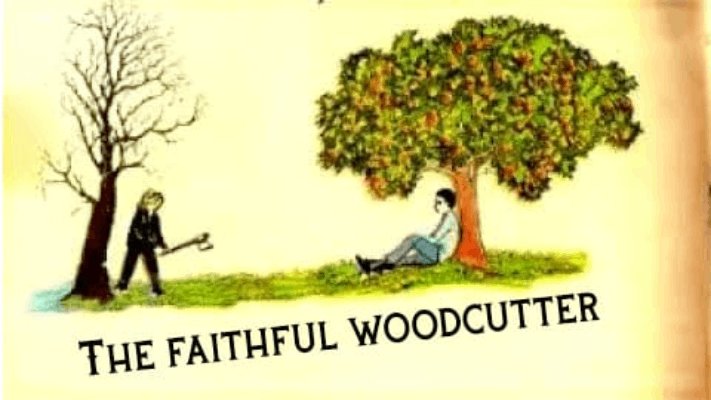 There was a time when a poor woodcutter had nothing but his day's food, and he had a beautiful young daughter, who was a sister to four other sons, and with them his old mother, and she was presenting with them in the same house and his wife.
It was known about the woodcutter that he was merciful in heart, tender-hearted, and had a strong love for animals, birds and plants, as when he went to the forest to pick trees and wood from their wood, he was taken by mercy and compassion and refused to cut them with an ax
**
One day, the woodcutter went out to go easy to the forest, and he was carrying an ax with him and praying to God to grant him the sustenance of the children, and before he descended before all his children, they began to pray for their father for sustenance while smiling and asked him for food and clothes, and he bid them farewell with a promise that he would bring what they asked for
The woodcutter took a walk in the woods, and when he approached a large old tree, he hit it with an ax and imagined at that time that the tree was crying in pain and begging to leave it. Indeed, he quickly left the ax out of his hand and sat next to the tree sad because he could not break it and took sitting under the old tree and when the anguish intensified He said to himself in deep thought
Where he said that I am unable to feed my children and the rest of the family and it is better to welcome them away from them so that my heart does not break from grief for them
And before he got up from his place, the woodcutter saw a bird that had left its nest on the tree and started looking for its food.
And he started looking for his food without getting bored or tired, until he found some crumbs of bread, so he took them to the miners with his beak and flew to eat them, and they were opening their mouths from hunger, and the view was very beautiful
**
The man was ashamed of himself and his confidence in God’s provision returned to him and he felt great regret and shame. He went back to his home asking God’s forgiveness. Suddenly, as he was walking, he saw something shining under the old tree. He bent down to take it and found a necklace of beautiful, authentic sapphire engraved with the name of its owner. The necklace belonged to a very rich prince with a reputation. In the suburb, the woodcutter used to pass by his palace every day imagining the food and luxury inside the palace, but he never dared to enter the palace.
The woodcutter returned to his house, and the woodcutter kept thinking about the necklace and said to himself, "This is a sustenance that God has given you. I will sell it in the market for a lot of money and feed my hungry children, but this mind did not last long. He looked at the children for long."
The children were having fun with confidence and reassurance, so he feared for them the forbidden sustenance and that God would punish him for what he had done
The woodcutter put the necklace in his pocket and walked to the palace. And when the prince saw him walking frightened by the wall of the palace, he said to him:
What do you want poor man you are not a thief
The woodcutter said: No, my lord, I found this necklace and knew it was yours, so I came to hand it to you
The prince looked at the old woodcutter's clothes in astonishment and said:
It's a necklace he mentioned from my mother and she can't have money that you can take it, it's expensive, but you are an honest man, so here's your reward
The prince immediately called the guards, and they placed in front of the woodcutter a chest full of jewels
The woodcutter said:
O my lord, I am a poor man, I have children, I cannot feed them, I do not take money for my trust, but if I could find a job for me in your palace, I would still be unable to return the favor.
The prince laughed and said: I appointed you in my palace as a guard for the horse stables, for she needs an honest man like you
The prince married the daughter of the woodcutter, and the woodcutter, his wife and children lived a happy life next to the prince and his wife, and whenever the woodcutter passed by the old tree, he thought that she would smile at him and say to him, “I have returned the favor to you.”
Of course, this teaches us that honesty is an inexhaustible treasure and with it a person is happy and without it he is miserable, so what would have happened if the woodcutter had taken the jewel, and at that time it had run out of its price and returned to poverty again, except that God honored him in exchange for his honesty.......