We meet a group of people named Shahateen and beggars, most of us can sympathize with them and start helping them in any way, but the issue has increased and became a trade and not any trade, not a very profitable business 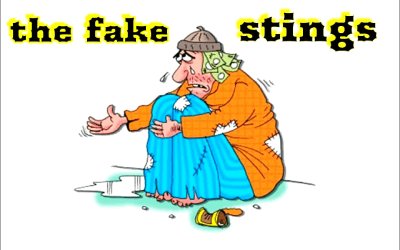 We meet a group of people named Shahateen and beggars, most of us can sympathize with them and start helping them in any way, but the issue has increased and became a trade and not any trade, not a very profitable business

Of course, there are many real ones in need of us all the kindness and all the help, and we are striving to know who deserves it

In principle, all of our lives, we know this beggar will remain, I mean, may God protect us all, he has something with obstruction, disease, or any reason that makes him have to, and there is no solution in front of him other than begging, and although they are satisfied, whatever the reasons, there is no begging.

Just imagine when you meet someone in his prime, as they say, and he stands up!!!!! Slim and healthy, he does not have anything to do and he extends his hand to someone who is going to work or for a student, and no student asks for any help. Well, as long as he, God willing, knows what is going on, he will not work, what kind of job do you earn a living from, why?!

You find him holding a lot of rumors and begging for it, and a lot happened, and many doctors looked for tests and radiation despite their complete refusal, and in the end they found it to people who were supposed to have died basically.

Of course, we will not work in it for people who literally need charity. We say to those who took it as a very profitable business.

This is the beggar, the son of people. Of course, most of us are exposed to him, and he is the one who enters and says, “Please, I just forgot my wallet and I don’t have money to go, and of course his appearance does not indicate that he is purely scarce, and at that time we used to sympathize with him or her and we would give him anything he would go with for a reasonable amount that would make him go while he was comfortable, but If you wait for one minute, but you will find him looking at another person repeating the same scenario with him, and this is one of the most types of begging that can provoke the brown Adam.

True, one of the most annoying things that can be is that you meet a child whose mother is able to work and spend on herself whatever the job is, as long as it pleases God. Arab women without even seeing their son, where will they go if they are really her children?

It is true that children are the most oppressed group. They are children without a single family. He took this child and taught him to beg with every skill as if it were a craft or a craft that he eats from, for sure. We all imagined what would happen if the parents of this child did not decide to get rid of him, or in some cases, they would unfortunately be kidnapped. Live a normal life like the rest of the children, he would have to study and have a family

This beggar child will be deprived of all the meanings of childhood, or he does not even know it, but in the first and the other, he will be the result of the people who use these children for profit

The biggest disaster is that there are families who teach their children to beg at the time when the father and mother are sitting at home waiting for the daily income of begging.

And oh, oh, we heard about beggars who die and discover that they have very great wealth. Oh, oh, we see the beggar who, once his day is over, lives and spends lavishly from the money of wretched people in the shark and this reckless spending comes through that I do not feel tired of the pound that takes a lot, they agree to find beggars standing and fighting in the street for one Take the customer and pay him an amount

Ah, in their eyes, we are customers, we did not say that it is a trade....

It is known that every trade has clients and customers, and we are their customers

And of course, we all know that no matter what, we are satisfied that God knows the intentions. I mean, even if we sympathize with any beggar and come up with an amount that you are looking for to God, do you count with your Lord his sincerity, our Lord will hold you accountable for your intention, even if the person who intended you is a liar

But try to give charity in places you are sure they need, or cases that you are sure deserve, hospitals, charitable organizations, special cases, poor houses, mosques, and of course we have a look and we know what is worth and who sets up fake scarves............