The magic turned on the magician and the jinn killed his owner (the mystery of the death of a magician in the movie, he returned to avenge the owner of the real spell in the movie) 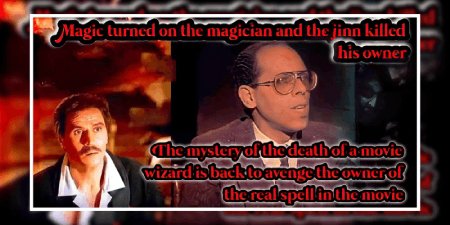 He appeared in the most terrifying Egyptian films and caused many problems in the atmosphere of the film, and it would have prevented the film from being shown.

During the filming of the movie He Returned to Take Revenge, the director of the film was Yassin Ismail Yassin, and he wanted to make a horror movie that breaks the world, and everything in the movie has credibility, because the dramatic plot of the movie completes, and of course comes the scene that we all know, and they bring the soul of the child in the palace. They came to a world of spirituality and said his spell It is assumed that the agreement is that they answer any actor and say any words and that's why no one understands anything, but Yassin Ismail Yassin refused very much and I saw that this would affect the credibility of the film, what is he doing?

The very well-known spiritualist at this time, Al-Husseini, the astronomer, brings us and requires him to say an incantation to prepare a real jinn in the film and the cameras’ shooting, and they were satisfied that all that was in Yassin Ismail Yassin’s brain was that even if he said that he was saying a real incantation, he would not tell you the whole incantation. Everyone in the studio is dressed, I mean

Indeed, this is what happened. The scene is valid. Al-Husseini stood up and said the incantation as if it were a real soul preparation session. Nothing was missing. The entire staff was surprised and the incantation was in every Egyptian house and all homes heard it, and surely we all hear the symbols he said in the movie, we feel tight and uncomfortable.

And an entire generation was terrified of the whole movie, especially this scene that we will never forget

This is other than what happened to the crew in the movie, including calamities and disasters that made all those present make sure that Al-Husseini actually used a correct spell.

The film is from 1988, and the first thing that Al-Husseini said was the exorcism from here. The devastation in the location of the filming took place to the point that the photographer was saying that he was seeing strange people who were not there at all, for the camera, and after the production of the film, one of the crew died without any reason, and after the film was shown In the cinema, the viewers felt a strange and uncomfortable feeling as soon as they left the cinema hall, other than the strange events that were happening to them, and they decided to prevent the film from being shown in the cinema at all.

It is known about him that, God forbid, he made a treaty with Satan and pledged allegiance to him and remained one of the most famous magicians in the whole world, and many famous people resorted to him and he worked more than one book on black magic

But he was found dead, his death was very heinous, and when the incident was reported to the police

The officer's description of the body was as follows

Exactly like this, he said, “His eyes were clear, his face was pale blue, almost rough, and his mouth was open from the choke.” He preferred the secret of Al-Husseini’s death unknown, but no one knows it, but the strange thing is the signs of the choke that appeared on his body, although he was accustomed to seeing the jinn, so what did he see that reached this degree of fear? And knowledge is with God, so that his death is a mystery that puzzles the whole world

This is other than that the police, while storming the house, encountered a very large amount of magic for well-known and famous celebrities by name, they resorted to this magician for private matters

Other rumors say that it was his wife who killed him or someone else who killed him with poison, but the majority think that the killer is crazy from one of the elves who were bringing them to help him

The strangest things they found in his house

The strange thing is that they found very large quantities of milk and tissues mixed with blood, and pictures of many famous people written on their backs are talismans and incantations.

And as we said, the merit of his death is a mystery that the police are looking into, because surely they will not consider the culprit to be elves. There is a logical reason in their lineage, and that the culprit must be human.

But the shock was the result of forensic medicine, and it was the surprise that turned the scales of the case, and the report was, “No one from the sons of man killed him or assaulted him, not even died due to a sharp drop in blood circulation. Of course, in this way, all agree that souls have a hand in his death, and there is no No trace of clots in the heart, not even in the brain, and since the police are not convinced of the issue of spirits, despite all the factors to confirm this, but I pointed the finger at the murdered wife

Until now, Al-Husseini’s death is a mystery, and Al-Husseini’s apartment is a much bigger mystery than the death of Al-Husseini, and this is because of what they put inside the apartment, and as we mentioned, very large amounts of milk and more than 16 handkerchiefs with blood on it, and the reason is unknown. Of course, they concluded that he used them in magic

This is other than what they found in his bedroom, and of course they saw the agenda of the astronomer's phones, which had numbers for people who were very dangerous.

The body was transferred to Bulaq al-Dakrour, who accused the astronomer’s wife directly. He was the brother of the astronomer Wada, because she was about 40 years younger and she was 23 years old. She was sure that she had poisoned him with the motive of killing him. In it, she would leave the house, and when the murdered wife, Rasa, was called, she said that she married him after a great love story, and that she was a big fan of the astronomer's books. She became one of the stars of society and attended all conferences with him and traveled with him to all countries. She acted as his business manager and organizer of his appointments. She was very happy with her new life, which she wished for, and she loved her husband very much, and he loves her too, but the sweetness is not complete as they say, because jealousy began to enter the heart of the astronomer and the feeling that The great age difference between them would make Rasha's wife the focus of the greed of young people, and he was surrounding her with his jealousy in every way, and the jealousy reached the point of beating, and Rasha's dream turned into a nightmare, and he was beaten and insulted by the astronomer. Everything increases, especially since the sisters of the astronomer were fleeing from their brother to the point that they explicitly asked him to divorce her. Indeed, Al-Husseini began to be affected by the words of his sisters, and before the accident of his death there was a really big quarrel, but Rasha's father tried to repair the relationship and on the day of his death he drank a lot of alcohol, which was known His love for her was so crazy that I was surprised by his health condition today, that she was very deteriorating unusually, and he started vomiting and took him to a hospital in the same property, but he died, and then she was accused of killing her husband.

In the end, the case was seized and they wrote that the cause of death was not known

And the movie preferred, to this day, has a terrible negative aspect, so try if you want to watch the movie again, flip the part of the amulet and hope you don't stay alone at home.........