The monkey that killed the king

There are many strange stories that fall on our minds, especially about animals. How many animals have we heard about that changed the course of history with many experiments by the Soviet dog Laika, who was sent into space a year on board the spacecraft Sputnik 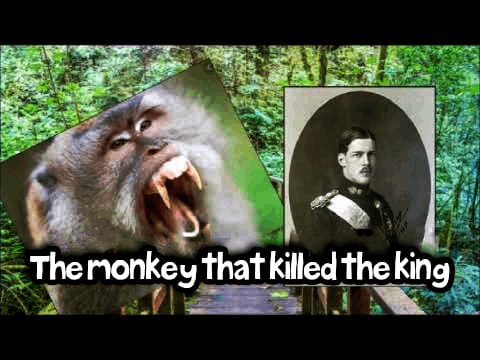 There are many strange stories that fall on our minds, especially about animals. How many animals have we heard about that changed the course of history with many experiments by the Soviet dog Laika, who was sent into space a year on board the spacecraft Sputnik

In the early twenties of the last century, the situation was completely different in Greece. During that period, the monkey determined the fate of an entire country, after his success in killing the king. As a result, this monkey became "the most influential animal in the history of Greece."

In 1917, in the midst of World War I, Britain and France forced the Greek king, Constantine I, to resign because of his pro-German positions, and as a result, the Greek king abdicated in favor of his son Alexander I.

Upon assuming the throne, King Alexander I fell under the influence of his minister, Eleftherios Venizelos, who was known for his sympathy.
With the French and British, Greece entered the First World War in the face of the Germans and their allies. Coinciding with the end of the First World War, the Greek Minister Venizelos, after obtaining the support of King Alexander I, placed

A military plan to create what is known as Great Greece, and through that, Greece sought to annex the areas inhabited by the people of Greek origin, which it had owned for thousands of years, to its lands. With the support of France and Britain, Greece did not hesitate to send its forces in 1919 towards the lands of the defeated Ottomans during the First World War, whose possessions were reduced to the borders of modern Turkey, and through this the Greeks sought to control a number of areas on the Ionian coasts.

Unfortunately, King Alexander I of Greece did not live long to see the transformation of Greece's great dream into reality. In 1920, the king suffered a tragic accident that caused his death within a short period of no more than 4 weeks.

In 1920, King Alexander I was going on his regular tour with his favorite dog in the Royal Gardens. During this tour, the dog attacked one of the monkeys to break out on
After that, a fight between the two animals, and at the same time, King Alexander I tried to advance in order to resolve the conflict and withdraw his dog, but unfortunately, the unexpected happened after the intervention of another monkey in the battle. During that period, a second monkey noticed Alexander I approaching the battle site, so he jumped on the king to bite him in several areas of his body, mainly between his leg and neck, which prompted a number of attendees to intervene to save the king of Greece.

During the next few days, King Alexander I's health condition deteriorated significantly, as his wounds, especially those on his leg, had rotted, which required surgical intervention to amputate his leg. Doctors slowed down in amputating the king's leg, as everyone refused to take responsibility for this surgical intervention, which caused Alexander I to die on 25th of the month 1920, and he was 27 years old.

After the death of King Alexander I, his father, former King Constantine I, returned to power again. Upon assuming his position, the new king dismissed many of the former army leaders before expelling Minister Venizelos. Simultaneously with these political changes, Britain and France revised their stance on the Greco-Turkish war. Moreover, the failure of the new King Constantine I caused military disasters that led to the defeat of Greece. Because of this monkey that bit King Alexander I, causing his death, Greece lived through many political changes that led to its defeat during the Greco-Turkish war and the end of Greece's great project during that period.