The trend of social networking sites issues pictures of a tattoo carrying an ugly woman's head and her hair in the form of snakes, and this topic aroused everyone's curiosity to search for the story of this woman 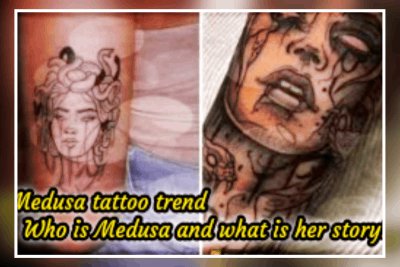 The trend of social networking sites issues pictures of a tattoo carrying an ugly woman's head and her hair in the form of snakes, and this topic aroused everyone's curiosity to search for the story of this woman

The story of a woman with hair in the form of snakes dates back to the Greek era and is one of the most famous legends of this era.

She is called Medusa or Medusa or Matis, and she is the goddess of wisdom and serpents who turned everyone who looked at her eyes to stone.

Medusa was a very beautiful and beautiful girl who fell in love with Poseidon, the god of the sea, storms, earthquakes, and horses, and gave him complete confidence, but he raped her by force in the temple of Athena.

Soon this news spread and reached Athena, the goddess of wisdom, war, strength, and protector of the city. Her eyes turned to stone.

From this illegitimate relationship, Medusa gave birth to two daughters who have the same ability to turn everyone who looks at them into a block of silent stone.

Medusa was killed by Perseus the Greek, who faced death in order to get rid of her.

The plan was to get rid of the evil of Medusa by using 4 tools, and they are a strong and sharp sword that is enough to kill her with one blow so that she can not look at him and turn him into a stone, and the Hermes shoe with which he can fly and Hades's helmet that covers him with darkness as he enters, in addition to the bag that He holds her head in it so that no one else is hurt by the power of her eyes.

Medusa tattoos on the body mean that this person has been raped or harassed, and whoever was exposed to this depends on showing this tattoo on his body.

Where they publish a song that says (If I knew that this was going to happen, I would have gone?) to indicate that when they went somewhere they did not expect to be assaulted and it became a trend among young men and girls who drew tattoos to indicate that they had been subjected to a case of harassment before that, and unfortunately we were surprised by very many cases I was harassed

And in a jiffy, the trend became circulating on Tik Tok, like any trend that became famous day and night

What do you think of the new trend?!

Of course, our religion forbids tattooing, and not every trend we run and see without seeing whether this is permissible or forbidden, and is this considered openly sinning?
Medicine, does this meet the standards of our society or not?
We have to think before we imitate anything we have seen but are still seeing