The Island of Dolls may have some of us who have heard about it, but for sure they don't know the whole truth 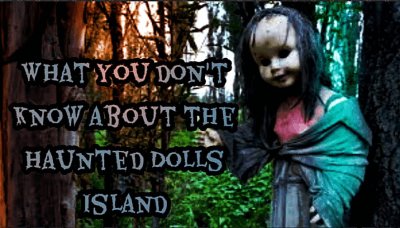 The Island of Dolls may have some of us who have heard about it, but for sure they don't know the whole truth

Dolls Island is a real, not imaginary, place in Mexico City

This island contains three huts and there are thousands of distorted brides, and for sure, the first time you reach it, you will never rest. On the contrary, you will feel uncomfortable and uncomfortable in this place, and if you ask the residents who live there, they will tell you that it is an island inhabited by ghosts and that it is a cursed island.

There is no way to go to this island other than one way, which is through the Sochi Melkwa canals, and this will be two hours away from Mexico

Gerardo Ibarra, founder of Ruta origen, a travel company in Mexico, said in a press interview that a Spanish soldier destroyed the Aztec civilization in Mexico with his forces, other than the horrific treatment with which they work with Native Americans, and this led to many people fleeing to Sochi, they owned in the canals and most of them were Oh, as for women, oh, for children, unfortunately the women at this time had to kill themselves because no one from the Spanish forces would find them and assault them. The island was a place for her to disappear there, and this island was not located in an unknown place. On the contrary, it is located within the boundaries of one of the largest capitals in the world.

There was a person named Julian Santana who was walking outside the house, and he was surprised to find a little girl at the bottom of the waterway that was going to his house. There were many strange problems and his uncle began to say that the girl's soul belonged to him, but one day he found that all his crops died and he tried a lot to improve his crops, but all his attempts failed and he began to fear more than the first

He decided that he would build an altar in the hut in which he and his wife lived, and the hut would consist of one room in order to satisfy the girl's soul. He says that his uncle started collecting dolls in a very large way. I am convinced that this is how he protects himself from the soul until he collected more than 1000 dolls.

But he used to collect them from the garbage, or there were neighbors who knew that he was interested in collecting dolls, or he was asking them to send him dolls, but there were visitors who brought him these dolls and he sat hanging them on trees until they looked very terrifying and there were among them those who were under and those who were beheaded and their shape was intended the horror

In 2001, Barrera died in the same place where the little girl was found suffering from a heart attack. Years later, the same islands appeared to my dolls, but they were imitated in the same place, and it became a big business, especially since this area was visited by visitors from all over the world, and it became a tourist area, all wanting to see an island Haunted dolls, in fact, and Barrera died before he could witness the tourist groups that had come to see the dolls he had hung himself.

Santana says that he sees shadows at night with moonlight

This is other than that many visitors say that they saw the eyes of the related dolls moving and they heard the dolls talking, and the same words are said by many visitors

Surely this is not a coincidence, and surely the island of the cursed dolls is really cursed............