Worship of the ancient pharaohs of the pharmacist 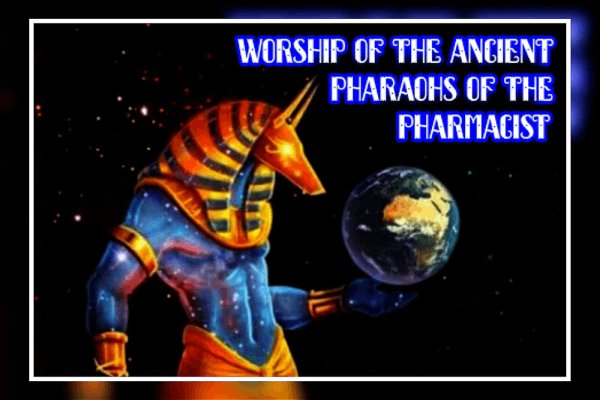 The matter started with herbs in the beginning. The Egyptians knew that there were herbs that could harm or benefit, so he began to record the beneficial and the harmful in order to use the beneficial in improving his health and avoiding the harmful for fear of his health. Gods
The priests also kept some of the secrets of the herbs in order to treat themselves with them from diseases, from which magic and chemistry began to appear.
In short, pharmacology has been the focus of mankind's attention before we even hear the word "civilization" because it was the basis of human health.

The ancient Egyptians used to consider diseases to be evil spirits, as they did not consider herbs to be inhabited by the spirits of the gods. They used to resort to herbs that contained the spirits of the gods in order to fight diseases and evil spirits with them. Hence, magic and sorcery mixed with pharmacology, and this explains why the ancient Egyptians were very good at Magic
Pharmacy is governed by 26 of the Arab constitutions because we were very advanced in this field to the point that the Egyptian scientists had a god for pharmacy, the god Imhotep and his divine title Merptah.
He was born in Luxor and his father was an engineer, and although Merptah was originally an engineer, he was very advanced in pharmacology to the point that he was the minister of King Zoser in the third family and was called the Great Priest and his prowess in the sciences of magic, architecture and astronomy, but his prowess in pharmacology exceeded all expectations and thanks to his skill and efficiency he was the man The first after the king and they established temples for him, the most important of which was the Temple of Memphis, which was part of a very important library. After that, it turned into a school for pharmacology and medicine. He is the first one to build tombs in the form of pyramids, and all this prompted the Egyptians to worship him until the year 2500 BC. He is the god of medicine
Pharmacy information is found in papyri such as

They discovered it in a cemetery in Luxor in the year 1861. They recorded 48 medical prescriptions for orthopedics and surgery in general, in addition to some recipes that return the elderly to his youth, and an American archaeologist bought it and noticed that the papyrus contained recipes for orthopedic surgery inside the human body.

Its length is 20 meters and its width is 30 cm. It contains 700 medicinal substances that the ancient Egyptians used to make 870 medicinal recipes that they discovered in Luxor.

It is two pieces that they discovered in the city of Kahun in Fayoum, and it includes 35 recipes for the treatment of gynecological diseases, and the second piece is for veterinary diseases.

It includes 17 medical prescriptions, including a pregnancy test and a number of spells, and it is in the Berlin Museum. The ancient Egyptians were the first people to invent a pregnancy test.

It contains recipes for treating eyes, burns, wounds and some secrets of mummification and is in the Museum of London

It includes forty-five recipes for skin diseases and is in the Vatican Museum
After the specialists reviewed these papyri, they discovered a very important thing, which is that the Egyptian wall that wrote it wrote it in an amazing way because it wrote with each prescription the type of disease, the method of examination and diagnosis, the type of treatment and the way to prepare it. The ancients were so interested in pharmacology and herbalism that they sent expeditions to bring plants from outside their borders and make new medicines with them.

The fame of the Egyptian pharmacists was so great that the Greeks glorified them
In addition, the kings and kings of the neighboring countries were resorting to them
With the passage of time and the division of medicine into many specialties such as dentistry, physical therapy, cosmetology, pediatrics, heart surgery, brain and nerves, kidney diseases, ophthalmology, veterinary medicine, analyzes, marrow diseases, dermatology, gynecology, obstetrics, orthopedics, internal medicine, mental diseases and other disciplines. After their appearance, the pharmacist turned to just one of these many branches. After what was the original, new problems appeared that began to harm his specialization, such as that the number of pharmacists increased the global average of one pharmacist for every 5000 patients.
Today, the pharmacist has a mandate, and the assignment is that after the pharmacist graduates, he works in any hospital for a certain period, and after the end of the assignment period, he is appointed directly to the government, and therefore the pharmacist who is not assigned does not get the appointment
There is also a law that prevents the opening of more than one pharmacy next to each other, so there must be a distance between each pharmacy and the other.